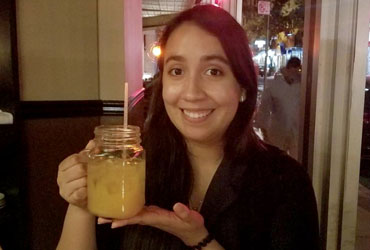 Angely Mercado is the Managing Editor of the Bushwick Daily, a freelance writer, and a social media intern at Democracy Now! Born and raised in Ridgewood, she sees her work at the Bushwick daily as a contribution to the neighborhood that made her who she is today and a chance to improve both her writing and managerial skills. Keep reading to see what made Angely who she is today.

Since mid-June, Angely has been working as the Managing Editor of the Bushwick Daily. This means working with contributors, holding meetings, monitoring content that gets published, making decisions on the kinds of pitches the Bushwick Daily receives, and guiding new writers.

“It was a great opportunity that opened up and somebody that I know through the CUNY Graduate School of Journalism… reached out to me because she used to be a managing editor here a few years ago. She told that me she thinks I’d be great for the position and she really liked this job. I could tell that it was something that taught her a lot. So it was just a combination of a lot of different things: I could still freelance while doing this [and] I can still learn a lot of stuff so I just decided to go for it.

Angely hopes to cover the present, the future, and also the past. She wants readers to recognize that there is a lot more to immigrant groups besides food coverage.

“I want Bushwick Daily to cover the spectrum of Ridgewood, East Williamsburg, and Bushwick. A lot of coverage is very centric on what’s new and I think when you have neighborhoods like these that are very rapidly gentrifying, sometimes at the expense of long-term residents who are low income and people of color, I think it’s very easy to forget the history of a neighborhood or how the history of this city has led to issues that we’re seeing right now in the neighborhood.”

“It’s very easy to dismiss something because you might not connect to it or because you don’t speak that language but that is still a part of this community and my goal would be to be as reflective as I can of a lot of different groups including Latin Americans like myself.”

Keeping Up With The News

From a young age, Angely’s family taught her the importance of civic involvement.

“I did grow up in a household where my dad is from Puerto Rico. They’re a colony. They’re under a form of taxation without representation. He was born a citizen, but he could never vote until he came to New York City in the 80s when he was younger and was able to be registered as a resident of NYC. He would tell me ‘When you’re going to grow up, when you’re going to vote, you need to read these newspapers because you need to know what’s going on.’”

Angely would watch the news and read newspapers in both English and Spanish at home. Her family valued knowing what was happening around them as it allowed them to make informed decisions. Growing up between Brooklyn and Queens, the most diverse area in the world, Angely understands that she needs to know what is happening. She has also interacted with people who are different from herself, helping her learn that there are many other perspectives other than her own. In addition to being raised by a family that emphasized the importance of the news, speaking with others has made her become curious as well.

“I think you need that curiosity for journalism. You need that sense of ‘there’s a story here’ to do this job. And I think that led me to media. I started interning for different places when I was younger. Tried to freelance. I wasn’t very good at it at first because it was harder than it looks.

“It’s really weird to get pitches to people. Sometimes it’s about making relationships with these editors and that can sometimes be hard because media, despite New York being one of the most diverse places, is not diverse at all… There were these barriers that I felt I had to think about all the time in order to do my job.”

As a woman and person of color, Angely felt especially out of place when she first started.

“They’re probably nowhere near as bad as they were for different people decades ago. But there is still this coat switching you do have to do in order to be somewhere or to present yourself as professional as possible… I would go to a very large newsroom to intern and then in this section, there would only be me, the person of color…

“But media is starting to recognize that more. There’s more discussion about having more women in managerial positions. You’re starting to see more different types of people or them having discussions about why different types of journalists lead to better coverage… and I think that that’s something I’m very grateful [for], that I’m at the beginning-ish of my career when people are having these conversations… it was just crazy to think that we’ve come this far, but we can still be a lot better as an industry.”

Angely also notes that thriving in the media industry requires creativity, the courage to experiment, and go with your gut.

“I would have ideas and months later, I would see stories about ideas I initially had… Just go with that gut instinct sometimes and pitch out an idea. If you don’t have the resources from a large publication to really go in-depth with something, do you have a personal attachment that you can write an essay about? Like a personal perspective, or an op-ed about this thing, which is what I started doing. Don’t be afraid to mix it up, don’t be afraid to learn stuff. I also do podcasting. I do a lot of photography. I know how to edit audio. I know basic photo and video. At least learn basic skills and very hard technical software skills.”

“I don’t get as much sleep as I would like, but I’m lucky that I get to be exhausted doing stuff that I care about.”

Check out the Bushwick Daily at https://bushwickdaily.com/