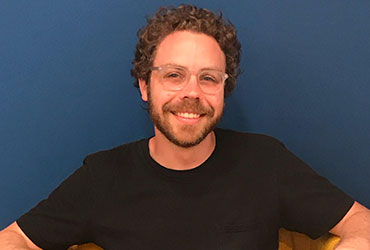 “I got into it accidentally… just to tread water after leaving my last full-time job. A year and a half later, I’m still doing the hustle. It was something I fell into rather than got all prepared for and pursued.”

Brian Simpson is a freelance writer and strategist originally from the suburbs in Los Angeles.

“I usually say freelance copywriter since that’s a good umbrella term for a lot of different things. I write marketing content for a bunch of different companies, mostly startups and some agencies, occasional consumer brands, or online magazines. Things like that.”

A Year and A Half Ago

Brian previously worked in-house at different startups for one to two years at a time. He liked the environment, but was always writing about just one topic for one company. It wasn’t exactly what he wanted.

“I was really curious about what it would be like to write up for all kinds of different things, change my voice, and meet different people. You get locked in at one company and if it’s not the perfect situation, you start wondering what else is out there.

“I started getting really antsy in the office. I was working at San Francisco, looking out the windows at these beautiful California afternoons, and I’m stuck in this office and I just was like ‘Why can’t I just go out, go to the park, and do all this work later tonight when I’m sitting on the couch anyway?’”

It all came together when Brian decided to move to New York City. “My girlfriend and I had always lived in California our whole lives. We always wanted to live somewhere else. The timing just happened to line up with our jobs and our living situation, where we had an opportunity to move.”

“We spent a month on the road. We drove from San Francisco to Brooklyn, and took the long way and stayed a few nights in various cities. It was just amazing, driving across the country. I love road trips. I’ve done a lot of road trips around the country. This was a particularly big one because we were actually moving.”

Landing in New York, Brian wanted to see what the city had to offer immediately. He ended up leaving his old job and dived right in.

“Probably just continuing the focus on doing exactly what I want to do,” Brian said when asked about what motivates him to continue freelancing. “At a certain point you have to treat freelancing like you have started your own business and what you want that business to be about.

“There’s a transition going from when you’re just starting out and you’re like ‘I’ll take whatever gigs I can get, just trying to make rent’ and when you start to get the hang of it and you switch to being more picky about the companies you want to work with, the kinds of  projects you want to do, the type of portfolio you want to build to represent yourself.

Brian loves writing as a craft and always strives to improve as a writer.

“Some of the writing that I’m more interested about, like nonfiction writing or screenwriting, there’s a lot of stuff that I don’t do work that I really love but for me, the skills translates. I might be writing a bunch of blog posts, emails, social media posts, and things like that but it does help your chops when you’re writing something you’re really passionate about.”

Brian tries to have a typical day.

“I try to get up in the morning, drink coffee, stretch, go to work early. Even though I’m a freelancer and don’t have to be in the office, I’ve had much better results from doing the routine of ‘get up, go to work.’ At least get some amount of hours in the morning, or just really focused work. Usually sometime around noon or 1pm, I’ll walk home, cook some lunch, let my dog out, do an hour of home ritual recharge and try to get back at in the morning.

“Because I work with a lot of the clients on the West Coast, a lot of my phone calls end up being scheduled in the afternoon. The typicalness breaks down by about 2pm, where anything goes, but I try to start everyday [this way].”

Brian first found Prosper Gowork while walking home one day. “I’ve been looking at different spaces in nearby neighborhoods, and hadn’t really found one that seemed like it was a comfortable vibe. A lot of them try to throw a lot of frills at you or they try to restrict the membership to box in what hours you can visit. This one was, I could tell right away, very comfortable, flexible, and so close to home.”

Skills Picked Up Along The Way

I learned a lot of the skills I have today from the years that I spent working in-house at startups. I started as a customer service representative, answering emails and phone calls from upset customers. That’s a form of writing of itself, when somebody emails the company and they’re upset and you need to try to make them happy again or solve their problem. I think that was some of my first writing that I was really getting paid for.

“Some of the nitty gritty professional skills of writing, certainly being able to hit deadlines, being able to manage your time. Somebody asks you how long will it take you to do this kind of thing, being able to answer that confidently, not over committing yourself, being able to take feedback, everybody wants to tell you what they think about your writing so you have to have thick skin for that kinda stuff.

Although Brian enjoys his current lifestyle, there are still some obstacles along the way.

“One of them is that everybody works differently… I have some clients who want the work as fast as humanly possible and I have other clients who are very “Oh yeah, I think we can get to that next week.” And so, balancing your own work week with respect to what is being demanded of you on these various fronts can be really challenging.

“You have to be good at mapping out when you’re going to do things and make sure you don’t stack up too much on a given day. It’s really easy to be like ‘I’ll take care of that tomorrow’ but if you do that enough that tomorrow list gets really long.”

Brian also has to be organized and aware of his situation at all times: keeping in mind everything that he has done and plans to do, tracking his income, being conscious of taxes, and making sure he gets paid at the end of the day.

After freelancing for a year and a half, Brian has much wisdom to share:

“Be really fearless about actively pursuing things. One of the things that people have said about me, which I never would have guessed is a skill of mine, is that I’m pretty shameless with reaching out to people directly. If there’s a company that I really like and I want to work for them or if there’s a person who authored a blog post that really speaks to me, I might just reach out to them directly. You just never know what’s going to come back and a lot of times people respond really well to seeing that somebody is passionate about what they’re doing.”

Brian also stresses the importance of managing your time and hitting deadlines. “Somebody asks you how long will it take you to do this kind of thing, being able to answer that confidently. Not over committing yourself.”